Posted on September 16, 2017 by accidentalhomesteaderblog

So originally, I was going to recover from a week of travel by staying home and lounging, but I woke up at like 6:30 (dammit), so I went into town with the husband.

He went to a Tormach(?) class at MakeICT, and I ran errands. I ended up at an estate sale, where I purchased a walking stick with a hidden dagger, and almost bought an antique travel trunk, but it was just slightly too rich for my blood. I also came home with a copper tea kettle and some milkweed seeds, as one does.

Lowes for more shelves… one always needs more shelving. And Michaels. Because, of course I did. About halfway through Michaels, I was inspired for Halloween costumes, so I’ve got that down. More on that another day.

I went to go pick him up from his play date at Make, and went to lunch. It was hilarious, I’m fairly certain we saw a prostitute plying her trade, and she seemed to have been successful, in that she went back to her room. The restaurant, which is delicious, is not the best possible neighborhood.

We decided to take the long way home and stop by junk stores. As we drove along, we saw several small planes and ultralights, so we tracked down the runway. We couldn’t tell whether it was an airshow or block party for the neighborhood west of town that is a fly in neighborhood. So we just watched. That was a first though, a stop sign to check for low flying airplanes.

We ended up in a junk shop that looked vaguely familiar. Possibly because we were there like two weeks ago. We’re smart. But we found a thing or two, and headed back to the farm. Of note, but not purchased, was the coffin sewing kit, for the crafty goth. 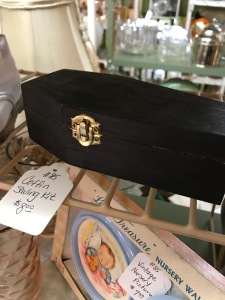 The good news is we have two layers now! The bad news is we also have two roosters. If the third easter egger starts to crow, I swear I’m gonna change her name to Coq au vin. I want blue eggs!